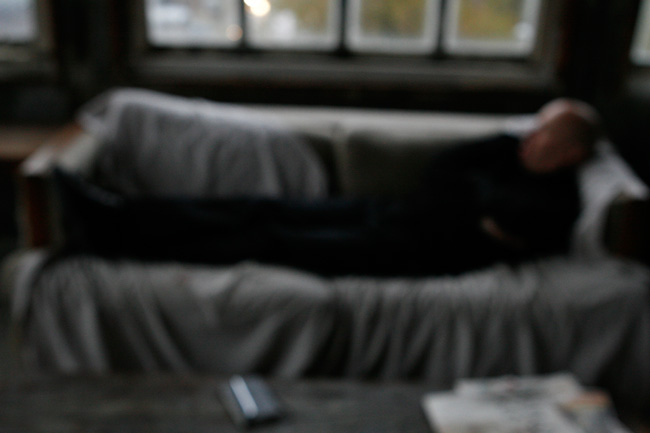 During the exhibition Matt Johnson and Johanna St Michaels will be present at Konstepidemin to talk about their work and ‘The Inertia Variations’.

The installation at Konstepidemin features narration, soundscapes and music from Matt Johnson (aka THE THE) and visual art by film director Johanna St Michaels. All inspired by the poem ’The Inertia Variations’. The poem is depicted through ethereal, shadowy images, soundscapes and words, that can best be described as ethereal. The installation at Konstepidemin is also connected to a steel sculpture on the roof of Röda Sten.

In sound by Matt Johnson:

“To match the intimacy of the words of ‘The Inertia Variations’, the sound-scapes will combine various sonic elements. There are pieces of music which are slowed down, or sped up to match the elasticity of time, as expressed in the drifting thoughts of the text. The soundscapes match the shifting of focus we see with the filmed images and the impression of moving backwards and forwards in time, between consciousness and dreamlike meditations.”

The black-humoured poem, deals with the shadow side of the western mind-set – one which is generally concealed from public view; apathy, fear of failure, laziness, the wasting of time and the various tricks the mind plays upon itself to avoid coming into contact with too much reality. It can be seen as one individual’s creative block and consequent struggle against inner demons, but also, on an outer level, as an inability to reach out and properly connect with the world at large.

In the age of relentless rolling-news and frenzied social-media activity the lone human voice is slowly being submerged beneath this tsunami of global mass communication. Even as individuals questioning these disturbing development, and trying to get an alternative message across, we are always at risk of being simply absorbed by the same system and carried along with it – just adding to this ever increasing cacophony of white noise.

The installation features a nine metres high illuminated steel sculpture, inspired by the design of Moskow’s Sukhov Tower, which was commissioned by Lenin as the first radio tower to transmit across the Soviet Union. This sculpture is the symbol of ‘Radio Cineola’, an imaginary shortwave radio station “broadcasting to every corner of the world” and inspired by shortwave broadcasts from the mid 20th century; a propaganda tool for governments but also a revolutionary medium for rebel forces. The sculpture, by architect Jacob Sahlqvist and blacksmith Lars Lincoln, is temporarily installed upon the roof of Röda Sten Konsthall from December 11th – January 15th. The sculpture illuminations are designed by lighting designer Kate Wilkins

Matt Johnson / THE THE – singer, composer

THE THE is a British multi-media group formed in 1979 by songwriter Matt Johnson. Numerous projects over the last three decades have involved collaborations with filmmakers, photographers, painters, poets and writers as well as musicians.THE THE have often sparked controversy and debate with the political content of their songs. www.thethe.com

Johanna St Michaels/Saint Michaels Production, based in Gothenburg, mainly direct and produce documentaries, experimental films and art installations with an emphasis on intensely personal stories and mixed media art. The themes have evolved around the existential, social and political issues of our time. Her films have been awarded both in Sweden and internationally. www.saintmichaelsproduction.se

Kate Wikins wide-ranging experience in theatrical and architectural lighting has produced designs that range from the playful and intimate to drama on a grand scale. Having graduated in Theatre design in 1991, she then worked with bands such as U2 and Depeche Mode and for different lighting consultants. Her best known work includes the opening of Tate Modern in London. www.katewilkins.com

Jacob Sahlqvist is a prized architect from Gothenburg. In his work his main focus has been physical branding for global companies together with ecologically, socially and economically sustainable solutions.

Lars Lincoln is one of the driving forces of Boll smedja in Gothenburg. In his profession he is attracted to complex challeges with high demands concerning estetical, technical and sustainability factors. His constructions are clean, simple, beautiful and scientifically built.

John Tottenham is the author of one book, ‘The Inertia Variations’, an epic and ever-expanding poetic cycle on the subject of work-avoidance, failure and indolence.