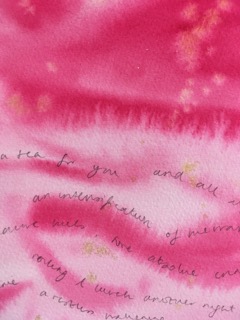 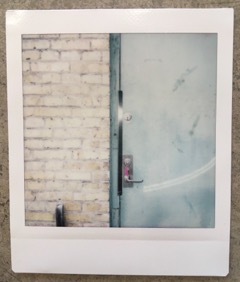 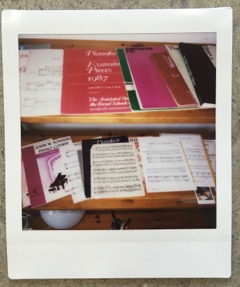 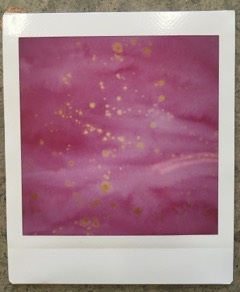 In May 2022 I found myself with access to a piano for the first time in three years.  This period had been a partly chosen and partly enforced period of renunciation from playing.  Uncanny though had it felt, I knew I was being called to relinquish playing.

All summer I played one piece, every day: Divenire

My work in this residency grows out of my summer playing and my week residency in Guest Studio 3 (June 2022), in which I discovered a unity in my work of playing, painting, poem and pencil.  A deeper self was emerging, who integrated new, lost and stolen elements of my being.

The being was in the music of the piano, in the playing, in the mystery of percussion and rhythm making the music of water, of flow.

I am not sure where this project might go.

A sudden alertness has taken hold – I am noticing new things, things I could not have seen as a child.  I notice how works I played were by men, how I’d not heard of a woman composer, although my teachers were women.  I notice how my own musicality was blocked, how I might have composed, but didn’t really, or made my own work, but, silence.

In this residency I follow the path of this longing and alertness into my personal history with the piano – from childhood to adulthood.  I will retrieve, revisit and reperform pieces played in each era – as a child, teenager, young woman and mature adult, starting with ‘The Wood-chuck’, by M.M in John. W Schaum’s Piano Course: A The Red Book Leading to Mastery of the Instrument.

What will it feel like to reinhabit my young girl self?  Will I find myself in the now-familiar confrontations with patriarchal forces?  With a deeper creativity?  Something else?  Why did my playing get blocked in my teens by illness, and again blocked in my twenties?  What has it meant to me that women in music are expected to trade on their sexuality for access?  Might it be possible to collaborate to open up new terrains for men and women in musical artistic practice?

As I reinhabit these earlier selves, and play, I will also listen.

Elizabeth Sercombe is an artist, writer, researcher and facilitator, whose work continually inhabits questions and experiences of being and becoming.  Her academic research was published in 2016 as Strange Adventures:  Women’s Individuation in the Works of Pierrette Fleutiaux and unites and extends the psychology of Carl Jung and the philosophy of Simone de Beauvoir in the investigation of Fleutiaux’s heroines’ own transformations and leadership.  Elizabeth’s commercial work invites individuals and organisations to embrace their own points of transformation with bold hope, thoughtfulness and a sense of adventure. She has held multiple residencies at Konstepidemin, the place in which she first learned to recognise herself as an artist.